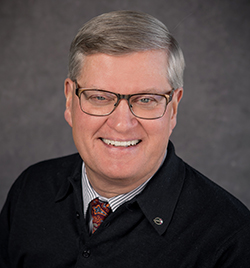 Eric Chrisinger is the President and CEO of Co-Op Credit Union in Black River Falls. He is a strong advocate for two-year education, often touting the strong foundational skills that allowed him to be successful in his community.

Chrisinger began his career at Co-Op Credit Union as a branch manager in 1981, becoming executive vice president in 1988 and finally President and CEO in 2008. During that time, Chrisinger has led many local organizations, including being a former board member for the Black River Falls Area Foundation as well as a member of the Rotary Club. He has also participated in several community initiatives through Co-Op Credit Union.

Chrisinger has a strong connection to Western and its Foundation. He has previously served as a member of the Western Foundation Board of Directors and has been instrumental in securing financial support for future Western students.

If you would like more information about the past recipients visit https://community.westerntc.edu/DistinguishedAlumni or please contact the Alumni Association at alumni@westerntc.edu or 608-789-6083.